Guide to Getting Withers

It sounds like some kind of crippling disease, doesn’t it? But it isn’t. The first place I went after the world shattered was Darkshore. I’d quested through here so many times on my various draenei and night elves. The changes the Cataclysm has wrought are devastating. Once I found out there was a pet associated with a quest in the zone, well – my path was clear. I had to have it. His name is Withers, and he’s similar to the Teldrassil Sproutling with a few key differences. Here’s how you can get one of your own, whether you are Horde or Alliance. 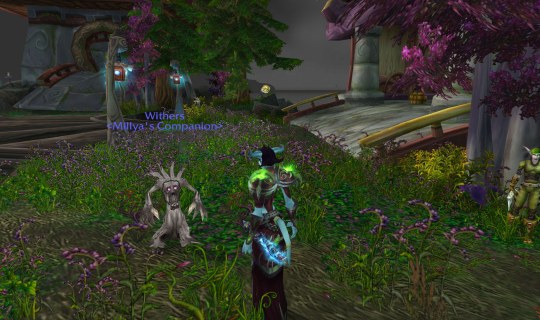 For Horde characters, Withers is actually a vendored pet. You can buy him from Apothecary Furrows. He’s located in the cave behind Cliffspring Falls (you can see it on the map). He’s down at the bottom of the cave in his own little room. Be aware that to Alliance he is hostile so he may have been killed recently if you don’t see him but you see apothecary stuff. Wait for him to respawn, he should be back. 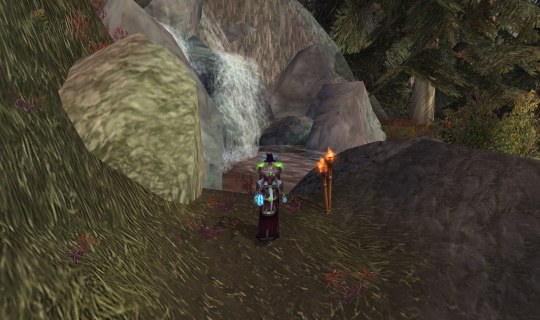 This is the entrance to the cave. If you are uncertain how to get up here, look for the torches that line the path at the bottom.

For those of us who are Alliance, it’s a little more complicated. Withers is awarded from completing the quest “Remembrance of Auberdine,” but you can’t unlock that quest until you do many, many more. I made a map that outlines generally what I did. Keep in mind that it’s hard to tell exactly what was required. I suspect that the quests to the far south (marked on the map) were not required, but they are awesome quests and I recommend you do them regardless! If anyone does this and tries to proceed without first doing those quests at Eye of the Maelstrom, please let me know if you were able to get Withers regardless. *Edit: I had a helpful reader let me know – the quests at the Eye of the Vortex are definitely not required to open the Remembrance of Auberdine quest, so you can skip them over if your only goal is to get Withers. 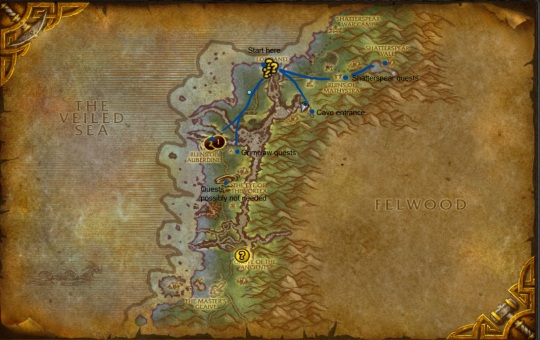 Quest hubs are marked in blue.

You will begin by questing in Lor’danel. When I wrote this last night this wasn’t there, but a helpful person on Wowhead has listed precisely all of the required quests here. You can refer to that list as you proceed, or just take a more casual approach as you go!

Lor’danel is where the flight point from Darnassus goes now, so it’s easy enough to get here. Some of the quests don’t seem immediately related, but are. There’s a worgen who has a fishing quest that used to be offered by a dwarf – I doubt it’s necessary to get Withers, but if you do it you do get 250 Gilneas rep. Do the rescuing and provisions quests and continue on to the Buzzbox quests. Unlike the previous Buzzbox quests, they don’t take forever and lead you all over the map. This chain will have you wind up in the same cave that the Horde access just to buy Withers.

Another breadcrumb quest will lead you down to the Ruins of Auberdine and outside the ruins to do some quests relating to Grimclaw. Continue doing all of these quests (do the Auberdine ones while you are nearby) before completing them and heading back to Lor’danel. A hint: if you complete the Grimclaw quest chain first it will end up helping you throughout the rest of Darkshore. I don’t want to give away any spoilers except to say that I chose the stag – and it gives a 10% speed boost in the entire zone. Not “for an hour,” or “while you’re on this quest chain” – it gives you a speed boost anytime you are in Darkshore from then on. It was useful for the rest of my questing!

I don’t want to give away any more of the happenings in Darkshore. These quests are amazing, in some cases heart-wrenching and definitely hit home for me given how much I liked Darkshore. Don’t just rush through to get Withers, take your time and enjoy them. Ultimately your efforts to aid the citizens of Darkshore and uncover some mysteries will lead you to the Ruins of Mathystra where you will be challenging the Shatterspear trolls. When you’re at this point you’re near the end! Continue along with these quests and once you are finished with them, Cerrellean Whiteclaw will have the Remembrance of Auberdine quest for you, and one of the rewards is Withers.

I’ll probably be going through these quests again with my druid and hope to add some clarification about which quests are mandatory and which are not – but until then, this gives a rough guide of what’s necessary to get the little guy. Feel free to ask any questions and I’ll answer them as best I can!

His name is Withers because he starts out HUGE – up to my hips as a draenei – and he will slowly shrink to “normal” non-combat pet size if he is away from water. Re summoning him returns him to his original large size, and if you take him near any body of water he will drink it and grow. More importantly than any of that, though, is that he’s a reminder of Auberdine for me. Every time I look at his sad little face, I’ll remember the Kaldorei of Auberdine and Lor’danel, trying to maintain an outpost in their dark and foreboding ancestral land.

Comments on: "Guide to Getting Withers" (24)