Soo, long time no see, huh? This was an avatar I did over the holidays. It was a gift commission for a Secret Santa exchange. I think it’s the first time I’ve done any lady worgen avatars, so it was fun. It’s for @GGElaina on Twitter and was commissioned by @_anea.

As far as Warcraft goes, I’ll admit to you that I’m in a bit of an odd place. I’m still enjoying the game and raiding with my guildies, though I don’t find I have as much to write about in the blog these days (obviously). The time was I could barely get posts out fast enough. Of course I’ve never been a mage theorycrafter of much note but I usually had something to say. Going casual as a guild has meant some mental readjustments that way. It really meant taking a step back in many regards – there were some days I didn’t do dailies. I don’t use the maximum stat food, preferring to use feasts that the guild makes. As far as I know, that hasn’t hurt our raiding progression, but even our raiding progression isn’t a top priority as such.

We made further schedule readjustments, going from one night (three hours) to two nights again but shortening the raid to a mere two hours each night. It allows for a later start and an earlier end, which is honestly a relief. It makes my days feel less punctuated by World of Warcraft and more like “this is a fun hobby.” If I’m being honest with myself, there was a good chunk of time when WoW was less a hobby than a second job.

At this time last year I wasn’t sure I’d still be playing WoW; Voss and I wanted to stop raiding as much as we had and we were fully aware that Business Time might close up shop as a result. I’m really glad that it didn’t, though, and this reduced schedule and more relaxed approach has suited us very well. There’ve been times when WoW felt like the only thing that was going right. The danger in that, though, is that if you put too much stock in a video game you react disproportionately to probably minor things. At other times I would despair if our progression wasn’t “fast enough,” feeling that it was a reflection on me and that I was letting the guild down by not leading them better. So these days I try to have a healthy balance. WoW is a game I love to play and I’ve made great friends through it. I spend time doing From Draenor With Love each week and that’s more “WoW-related” time, and otherwise I have cut way down.

I didn’t exactly make any new year’s resolutions but if I had to choose one word for this year (as Alas described) it would be purpose. I’m trying to recognize my purpose in many areas of life and not to lose sight of it, and also to have some perspective about goals that may take some time to achieve. Having no control over things makes this more a necessity than a choice! Anyway, I spent about three days over the holidays working on this: 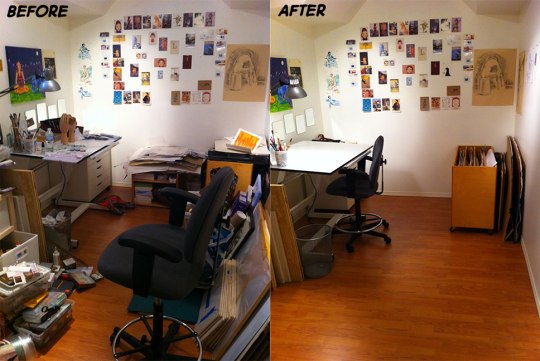 This is my studio space, which is where I do non-digital art. As you can see from the first photo, it’s been pretty difficult to get in there and do anything for the past…oh, I don’t want to say exactly how long. But you can see to the right of the photo that portfolios and drawings are piled foot-deep there. Notice how on the right-hand photo those are mostly gone? I filled five garbage bags with old drawings and other detritus. The space is ready and waiting for me and it feels good. I won’t go into too much personal detail except that the past year has been punctuated, it seems, by illness or medical concerns, doctor’s appointments, ultrasounds and bloodwork. It’s tiring and it’s really interfered with my ability to work. The only thing I managed to be consistent about was From Draenor and my raid schedule, which I’m proud of but it’s not really enough. I also can’t remember the last time I did any art just for myself that wasn’t Warcraft related. I love the Warcraft universe but I also don’t want all my creative endeavors to depend on someone else’s intellectual property. It’s something to think about, anyway.

Don’t write me off your feedreaders just yet, I promise to write here as topics strike. I’m just a bit preoccupied at the moment. I’m starting up a personal blog at another url so that I can write about personal stuff without feeling like I am bombarding an audience who really wants to talk about World of Warcraft. That blog’s not up yet, but I will share the url when it’s ready if anyone is interested. It will likely be a catch-all for my other interests: art, food and cooking/baking, games (other than Warcraft), and also health stuff. I’d be happy to see some familiar faces reading there but I won’t be offended if you don’t. I’ve lost touch with some Warcraft folks over the years especially once they leave the game and it’s sad but expected. Sometimes our friendships can survive the loss of a shared universe and sometimes they can’t. I’m always happy when they do, though!

I hope you all had a great holiday and so far a good new year. I hope I’ll have more to share with you soon.

p.s. Due to the departure of a few good Business Time friends, we’re currently looking to recruit a ranged DPS, preferably a hunter or warlock. Hunter is the highest priority because right now we have ZERO and all that mail agility gear just rots. So if you are a hunter or an exceptional ranged DPS of any kind and you’re interested in a home for “semi-retired hardcore raiders,” check us out. Our thing is we still have minimum play standards to avoid frustrations that can sometimes accompany very casual raiding, but if you’re looking to push much hardmode progression we’re a bit over that. We just like to be casually awesome, kill some internet Mogu and have a few laughs. We raid two nights a week as mentioned, two of either Monday, Wed, or Thursday from 6:30-8:30 PST. Each week we look at signups and determine the days, so some weeks it’s M/Thurs and other weeks M/Wed and on a rare week Wed/Thurs (we try to avoid that).