I have to really resist not adding my own text in here, but I thought this would be kind of funny. I’ve been feeling sketchy lately, and going to visit Malfurion for Childrens’ Week sparked this idea. I obviously have some notions as to what they might be saying, now I want to hear what YOU think. It’s a contest of sorts but I don’t know if there will be prizes, apart from the delight of putting words in Malfurion and Tyrande’s mouths. Click the image to see a larger version!

So, for weeks I’ve been hinting on Twitter (annoyingly) about a “top secret” project I couldn’t talk about. Well, folks, it’s finally done (which is to say, begun)! Although if you’re fortunate enough not to follow me on Twitter, you didn’t know about it anyway (and I didn’t annoy you). 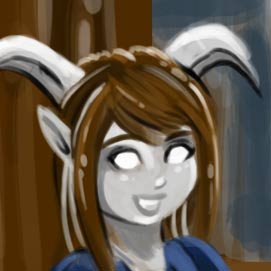 From Draenor With Love is a webcomic that I have been collaborating on with Rades of Orcish Army Knife fame. We both worked on the website, although all the CSS fancy-stuff was his doing. I made graphics! I do the art for the comics, he writes the comics and we discuss them at length. I originally pitched this idea to him along with a half-completed comic that was made even better after he added his ideas to it, thus proving that two creative minds really are better than one! The painting part is a bit more solitary, but it really is a joint process in many ways and I’ve been loving it! We’ve been cooking this up for over a month now getting it ready to go “live” and I’m pretty excited about it. I hope you’ll enjoy it! It is going to update weekly on Wednesdays (yes, today it is Tuesday, it won’t update this Wednesday.) This is a bonus, one day early comic, but not a moment too soon! I wrote more about that over at FDWL, so all I will say here is:

Go check it out! I’d love to get any comments you might have if you’re inclined to leave them. We’re both really pumped about this project and the anticipation of tomorrow feels a bit like Christmas to me to finally pull back the curtain on something we’ve been spending so much time on. I know it’s only one comic (so far) but we’ve actually completed many more than that! If you enjoy the work of either Rades or I (hopefully both) I think there should be something for everybody. Plus, it’s not Horde or Alliance-centric. There’ll be a good mix of both viewpoints and factions, which is part of why I’m excited about it and what I think is a bit unique.