My history with Death Knight characters is pretty simple: I don’t play them. I created one on my current server an age ago, to check out the local culture. I leveled her through the DK starting zone while keeping one eye on my prospective guild. I wanted to know who was online at what times, I wanted to see what the economy was like, and just generally get a feel for the server. This Death Knight became my bank alt after I parked her in a city, and was later deleted in favour of making one of my level 80 characters into a bank alt. I didn’t regret her loss, especially since deleting her meant that Millya is at the top of my character list.

But recently, I offered to help a friend out by being a villain in a storyline of hers. Naturally we aren’t on the same server so I needed a character high enough level to get around. It was with some trepidation that I made another Death Knight and then proceeded to not level it. I asked Snack for some tips and he wrote me a long, comprehensive e-mail that covered speccing and rotation. I put the buttons on my bar in the exact order they were to be cast in. I began completing the quests to earn some talent points. I thought things were going well enough, but I had forgotten an important fact: I am the world’s worst DK.

I death grip when things are already standing right next to me. I get flustered and just roll my hand across the line of buttons, forgetting the carefully calculated sequence. Just when I was starting to feel okay about things – having a few levels under my belt – I was sprinting around feeling all fearsome when I FELL OFF the Ebon Hold. Yes. There are no guardrails there. I fell right out of the dread floating base and plummeted to my (re-death) far below. Chagrined, I released before any other new death knights could witness my shame. I’m not sure what Arthas would actually say. “We went to all this trouble to make you a weapon of death and destruction and you die from FALLING? Come on, work with me here.”

Still burning with the shame of that, I continued slaughtering the innocent and otherwise generally making myself a nuisance throughout the countryside. I was happy to talent deep enough into Unholy to obtain something I’ve never had before: a ghoul with a name! I was excited to meet my new companion in death nuggetry. He was just perfect. Or should I say, we were perfectly suited to one another.

I hope you have all your pebbles in a safe place.

Yes, Pebblethief. My frightening companion in crime apparently earned his moniker performing such evil tasks as…stealing pebbles. Not even rocks, just pebbles. From whom? Well, we’ll never know. Maybe kids with a rock collection? We made a good team! Well, this is partially true, even though he caused me some unnecessary upset. If you’ve made a Death Knight before, you know the part where you are told to go and dispatch one of your own kind. This varies slightly from one race to another, with words carefully calculated to absolutely devastate you unless you have a heart made of…pebbles.

Here was my encounter. It’s been so long since my first DK that I screen-shotted the text. I wanted to have it in case I ever wanted to work it into a draenei-related post later on. Yes, that is a mage addon in my UI, blinking frantically to tell me: You don’t have any mana gems! I’m not sure it’s possible for you to not have any mana gems! Are you even a mage? What’s WRONG WITH YOU.

"I'd recognize those face tentacles anywhere!"

So I suffered through the speech. “They’ve tried to drain you of everything that made you a righteous force of reckoning. Every last ounce of good…Everything that made you a draenei!” I knew I was going to have to kill this guy, but at least I could sort of cringe through it and then never think of it again. Except that when the time came…he died, and I didn’t get quest credit. I was confused. I ran back to the questgiver. I checked my quest log. Nope, definitely no credit for having killed Valok the Righteous. I waited for him to respawn. I did it again, muttering under my breath, and again I didn’t get quest credit. I dropped the quest and ran back to the questgiver to make sure I had the right quest and why are you people tormenting me by making me kill draenei over and over again. A third time and STILL nothing, when Voss casually walked by and said, “Oh, look, your ghoul is killing him too quickly. Or maybe it’s just that you really like killing draenei so you wanted to do it again, and again…”

Ugh. He was completely right, and dismissing Pebblethief before attempting this horrible task did the trick. Poor Valok, I’m sorry. I run with a different crowd now.

Pebblethief, my trusty ghoul. We quested along together right up until the point where I was going to hide in a minecart, sneak onto a ship and wreak havoc. I should preface this by saying that I don’t play pet classes very often. I realized my mistake too late. I hopped into the minecart and it began to move. Pebblethief blithely followed along as my mine cart was towed onto the ship. A chill ran down my spine as I realized what was about to happen. I couldn’t unsummon him, and a whole crowd of elites awaited. (I’m not going to say anything about the relative intelligence of the Scarlets, who weren’t suspicious about a mine cart being chased by a ghoul.) Alas, poor Pebblethief, a ghoul cut down before his time. May you live (again) in gentler times, my friend. Preferably with a DK who isn’t a complete noobcake and will remember to unsummon you before embarking on any “secret missions.”

I’m good with artillery, though, so the mission on the ship went off without a hitch. I obtained a new ghoul afterwards with a forgettable name and continued questing towards DK freedom. Everything was going fairly according to plan (thanks to Snack’s instructions) and I was nearing the big dramatic scene at Light’s Hope Chapel. I waited patiently for the battle to begin, and then began slaughtering the forces of Light with abandon. It was fun, and then it was dramatic, but there was a problem. Once the actual talking scenes begin, everyone is supposed to go neutral and wait for their betters to finish being dramatic. Well, this guy didn’t get the message. (p.s. This whole scene is better if you listen to this music at the same time, much thanks to Rades). 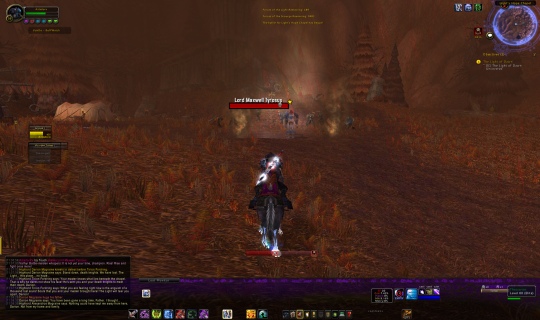 I come in peace.

You may have noticed, he’s also a boss. So I ran up to stand with my undead buddies and listen to what was happening – he pulled out of the pack, ran over and one-shot me. (I’m only level 58!) Thinking he’d be sated by my needless slaughter, I quickly released and ran back to my corpse so that I wouldn’t miss the scene. He was still there, and he casually cut me down again. This time I spirit rezzed, so that I could come back on my dead horse thing and stand a snowball’s chance of actually running away from him before he killed me again.

People with skulls on their nameplates have a really large aggro radius when you are level 58. He began to chase me, the entire time this was going on. “He’s sent you and your death knights to meet their doom, Darion!” Imagine, extremely dramatic scene, very important lore figures…and one jackass death knight on a horse sprinting CIRCLES around everyone present with Lord Maxwell Tyrosus hot on her tail. I ran this way, large, looping circles (trying to stay near enough to still get quest credit at the end) throughout the entire scene. Even when the talking was over and I had to go and pick up the quest to learn the Death Gate spell – even then, he didn’t relent! I had to kite him far away from the chapel so that I’d have enough lead time to turn in and pick up the quest before he could reach and kill me.

I can just imagine the irritation from all these high-ranking death knights and paladins.

“What is that one doing, Mograine?”
“Oh, you know, sometimes their brains have started to rot a little… Stop that, will you?” (Gallop, gallop)
“Tyrosus, why are you chasing her? Stand down, man!”
“Death knight scum! /froths”
“Oh, forget about it, let them play, we’ve got to do this scene. Ahem– You have been gone a long time, Father.”
Me: *whimper*

I completed the rest of the quests with resurrection sickness, the debuff falling off just in time for me to go to Stormwind and get pelted with fruit. I have a question about that, actually. The spitting, that I can understand. That’s easy. But why do all these Stormwind guards just happen to have pockets full of rotten fruit? It stretches my suspension of disbelief a little. Is it yesterday’s lunch, just ripe for death knight pelting? Why do they ALL have it?

Death Knights can’t catch a break. Now that mine is level 58, she’ll only be venturing out to help with Rhoelyn’s story, and I think it’s time that I accept – I just wasn’t meant to level a Death Knight! Just be happy you’ll never run into me in an instance. It could be ME on the other side of LFD.

"Hey guys, what's up? We going to kill some paladins?"