Posts tagged ‘once upon a noob’

I found this entry in my draft folder from June! I don’t know how I forgot about posting it, but it seems particularly appropriate now as many folks endeavor to recapture and revisit old content in preparation for Azeroth’s greatest fashion show.

I was struck the other day by nostalgia. I don’t think I’ve played any other game so consistently for so long. (And I’m not an “old-timer,” I only started at the end of Burning Crusade in approximately May 2008.) But that’s still three years of time!

I remember being so completely awestruck the first time I saw someone riding a Talbuk. It was in Menethil Harbor and we’d just taken the boat. Someone rode by on one and I gasped to Voss, “What is that? I want one!” I swore then and there that I would have one. I was the first person of my acquaintance to complete the grind with Kurenai. Talbuks have been Millya’s preferred mount ever since. They just seem so perfect for draenei to me, and even when I hadn’t seen Nagrand at all I somehow knew they’d be “right.”

Before I had a talbuk, though, I had my eyes on another prize. The first time we saw the Barrens I was similarly enamored with the Zhevra. It’s a unicorn, but it’s also a zebra! I was crushed to learn that they weren’t actually available as a mount. Until about a month later, they were announced as the very first mount reward for Recruit-A-Friend. Naturally, I knew what I had to do. 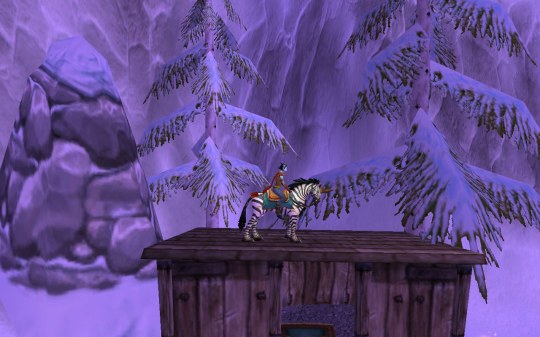 I remember feeling very pleased with myself, too, because I saved money by not having to buy one of the mounts. Yes, the money at the time was a big enough deal to me that I was concerned about saving enough to buy a mount. At the time, WoW felt very much like the “haves” and the “have-nots” and I was squarely in the “pretty poor” camp. This was something I could have, and I was happy with it. (Note, I’m not whining here about my broke state. I hadn’t learned to use the AH or make money in any way. Nowadays it seems really easy to make money and there are plenty of resources for folks to learn how.)

The other thing I greatly looked forward to was matching armour sets. When I hit 70, I had my pieces of Spellfire robes ready to roll because I’d been painstakingly crafting cloth (and borrowing the CDs of others) for weeks! I was so excited to have a set of armour that matched. I then spent a week straight in Alterac Valley to get the best (PvE and PvP) entry-raiding staff that there was:

Every caster had this, because it was awesome. I still have it in my bank because I am so proud of it. I’d never PvPed before, but I wanted the best thing available to me. It was nice to go to Kara and be passing on stuff because it honestly wasn’t an upgrade. (My obsession with gearing my characters even outside of raiding started really, really early).

Firehawks and lynxes and bears, oh my!

One of my other great memories is going to Zul’aman with our ten-man group and downing it all. I think we missed the nerf by a week; I can’t remember if this was pre or post-nerf but I was so proud that we did it. This was as far as ten-man progression allowed at the time, and we were just a small guild. This screenshot of old friends makes me smile. 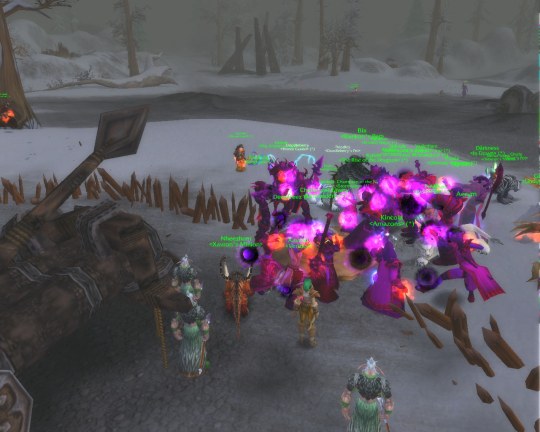 "Wicked, wicked, mortals! The forest weeps. The elements recoil at the destruction. Ivus must purge you from this world!"

In the time I spent doing AV, I got to summon Ivus the Forest Lord not once, but twice! For those who are unfamiliar, you can summon this big bad when an AV match is interminable. It seldom happens now because there are things you need to do beforehand and most AV battles tend to be zergs. This is what the summoning looks like. I unfortunately lack a screenshot of the Horde players flailing around as we rode forward with Ivus ahead of us, scattering players like popcorn. The element of surprise was on our side because I think most of them didn’t even understand what was happening and had never heard of Ivus, let alone seen him. This is still hands-down one of my favourite AV memories.

"Oh! I have slipped the surly bonds of earth, and danced the skies on laughter-silvered wings..." (John Gillespie Magee Jr., "High Flight"

Finally, this is a screenshot I just had to include. Do you remember how you felt when you were first able to afford a flying mount – any flying mount? Who cared that it wasn’t as fast as the other ones? I imagine for most of us, we’ll never have the actual feeling of piloting a plain or hang-gliding. Yet who isn’t captivated by the idea of flying off into the sky?

I know some folks are not happy about the changes to Azeroth and the addition of flight. I think that it’s absolutely a shame if you never come down to the earth to pay attention to all of the details and work that’s been put into creating this world. At the same time, I love being able to fly everywhere since the first moment I could fly, and I wouldn’t trade it for anything!