Posts tagged ‘who would have guessed I’d need a warlock tag?’

Why Do Warlocks Never Last?

It’s a running joke in our guild that the warlock “position” is like the Defence Against The Dark Arts teacher.

When I joined, we had a warlock. He left in a fit of pique after his performance was called into question. I’m not going to share any more dirt than that, though. The end result was one down!

We found a replacement warlock who was pretty impressed with his own importance. More importantly, he never signed up for raids on time. When he was called on this, he left citing “personality differences.” Two warlocks gone.

Our third warlock was actually a hunter who switched to play his warlock. As a casualty, this was the first one I can take semi-credit for because we had some conflicts, he and I, after I assumed guild leadership. By that time he was playing a shaman, but I think he played his warlock for the longest, so in my mind it counts. Third warlock, gonzo.

Our fourth warlock started out as a warrior DPS and switched to give us greater access to ranged players. He was there for our H LK kill, but switched to playing his DK at the beginning of Cata (and ultimately stopped raiding). Goodbye, ex-warlock the fourth.

Finally, our most recent warlock, who is an all-around great guy and fit in really well, has reached the end of his WoW career and decided to hang up his hat. I can’t do anything but respect his wishes, of course, but I’d be lying if I said I wasn’t sad to see him go. He was like the dream warlock. I should have known it was too good to be true!

What I want to know is, what is it about warlocks? I grant you that mine is anecdotal evidence, but there’s no single class with higher turnover in the guild than warlocks. We’ve had the same mage(s) for almost two years. Our shaman is rock-steady, as is our druid, and even folks who stopped playing still stayed for a really long while with the same character.

I have a few crackpot theories. 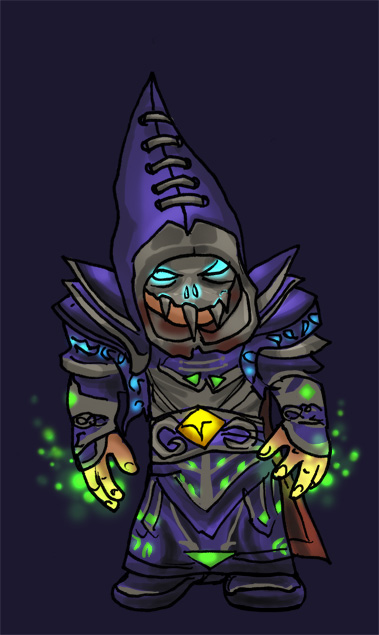 Have you seen me?

Crackpot Theory #1: People playing warlocks have often been playing them for a long time.

As one of the original classes that seems to have always done good DPS, many warlocks have played since Vanilla. This was a reason cited by our recent warlock – seven years of playtime (in one game) is a lot. You’re bound to get tired of it eventually, right?

This was a joke, but I’ve definitely seen a correlation between people who play DKs and Warlocks. Either warlocks have DK alts, or they switched to DKs when Wrath came out, or vice versa. Maybe it’s not that warlocks don’t last, it’s just that they all become plate-wearing pet-commanding disease-wielding deathmongers instead? (100% less fel).

Crackpot Theory #3: Something about our guild is repellant to warlocks.

Maybe we have too many Draenei. Maybe the anti-warlock sentiment is too strong, or maybe they just sense our inherent mageliness and think, “Nah, I’m out of here.” I’m not actually sure what it is, or if there’s any correlation to anything at all. But there has to be something, because we just can’t seem to hang onto a warlock!

What do you think? Is your guild stuffed full of warlocks? Have you seen a dwindling of the warlock population? Do I need to try and find a “Care and feeding of your warlock” manual so that I can hang onto the next one (if we can find him or her?) I welcome any and all warlock conspiracy theories.

p.s. – You may have guessed this from the post content, but we’re looking for a warlock. A balance druid or a shadow priest would also be welcome!