For reasons that will be the subject of another post at some point in time, lately when I pug I’ve been pugging as a mage. It increases the wait times significantly and it’s often the result of insomnia. Last night I was fishing and when my LFD window appeared I was surprised. I had completely forgotten I was even in the queue! The pug started off poorly, which I actually prefer. If a pug is going to fall apart within the first few bosses, it’s nice to know.

This pug had a tank with other important things to do. So he stood there, and stood there for about five minutes before he finally started moving or responding to greetings. “Sec,” he said, and continued to stand there. Finally, mercifully, we killed the first troll and he began to run through the hornets and then promptly died. The hornets killed everyone, and the tank made some sound of confusion in party chat.

“You fell off the bridge,” the hunter told him. We all run back in, this time killing the hornets. I figure, hey, everyone makes a clumsy move sometime. Except then the tank stops moving again. “One sec,” he says. The healer drops group. We get another healer immediately and we’re moving onto the next actual troll in the instance. Somehow a hornet joins this fight and eats the healer while the tank blithely keeps “tanking.” The shaman healer uses his ankh and the tank pulls the next trash before he’s even moved off the bridge. We all die horribly. I don’t do this often, but I initiate a vote-kick on Mr. “Defender of A Shattered World.” The reason? “Self-explanatory.” A tank that can’t even make it through the initial Zul’Gurub trash without falling off bridges, AFKing and pulling without his healer is not going to do well.

We get another tank – a paladin – and things go pretty smoothly for awhile. Amazingly we kill the first boss with no deaths, which is fairly unheard of in the ZG pugs I’ve seen. So many things that need avoiding usually kill at least a few people! The raptor boss dies as easily, and we kill the Archaeology boss without occasion for remark. Nobody even dies to the fire gauntlet! It’s all going swimmingly, up until we reach Bethekk (aka the Panther boss). This trash is pretty intense anyway, but some of it is also bugged and will pull through the wall if you use AoE. In a guild group we’ve managed to survive the combination of extra trolls along with existing trolls, but not tonight. We wipe to this trash at least twice, it might have even been three times. Patience seems to be wearing thin quickly judging from the tone in party chat. We apply crowd control liberally to the group at the bottom of the stairs and manage to make it to Bethekk. The actual boss fight is easier than all of this wiping on trash. But the best is yet to come – as we make our way to Zanzil’s area, the tank confesses that he is new to the fight.

Something about saying he hasn’t done it seems to send both the shaman healer and the hunter into a rage spiral. “Oh great,” the hunter says. They give very cursory directions to the tank, amounting to “don’t stand in the fire” and then pull. Somehow, they’re surprised when we wipe. 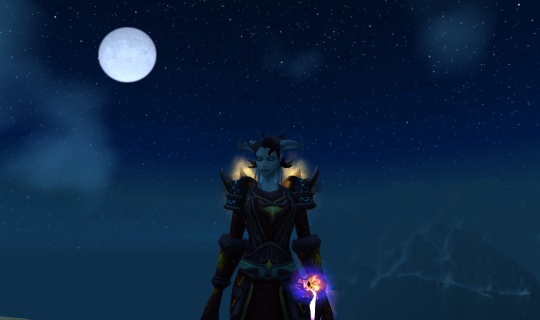 I can't remember why I took this screenshot, but somehow Millya's making a great "pug expression" for me. She even looks like an insomniac, but that could be my imagination!

The shaman berates the tank for not getting out of fire as quickly as he should, and the tank admits that he was looking down at his ability buttons. Mr. Shamtastic is so busy berating the tank for being terrible, that he stands there typing insults while the tank pulls again – so he’s locked outside of the encounter area, and we all die quickly. Of course, this only makes matters worse as party chat is degenerating into an epic round of the “blame game.” It’s just this shaman’s luck, being stuck with such a fail tank, etc. etc. I interject at this point, “It’s no crime to be new to a fight.” (Thinking of Shintar, I add a smiley at the end.)

“It’s a crime to pull without the healer,” the shaman retorts. I don’t bother to reply. Each mechanic is re-explained for the benefit of the tank, and after approximately four tries (total) we kill him. “The next boss is going to be a bitch,” the hunter grouses. We proceed to the next boss while the shaman and hunter alternate scolding the tank about how he has to do THIS for the last boss and THAT for the last boss or we’ll fail. They seem to be hitting all the relevant explanations so I just let them go on.

The tank assures us that he’s seen the fight, just not tanked it. I add some paladin specific stuff (yes, I tanked it for a pug just the other week! It’s a sickness) mostly related to using Righteous Defense on CD to help keep things from killing the healer. Unfortunately, the tank doesn’t manage to get into the safety bubble quickly enough to avoid the Shadows spell. So we try again. And he fails to do it, again. At this point I can imagine the hunter on the other side of the screen frothing and throwing a fit with his keyboard. But I figure the tank deserves at least a few tries to get this fight right.

“45 mins for these last three bosses!” the hunter rants. The atmosphere in the pug is getting worse, if that’s even possible. Completely contrary to how I would have reacted in his shoes, the tank says, “Let me give it one last try and then I’ll drop group since I’m holding you up, np.” This attempt doesn’t go any better than the previous ones, and we wipe again before even finishing the first phase. The tank drops group wordlessly, and his corpse lies there like a silent testament to the punishing nature of pugs (and perhaps hunters in particular). It doesn’t take long for us to get a replacement tank; this one is a DK that knows the fight and it goes off mostly without a hitch. Every Body Slam hits a chain, which is probably for the best, as I’m sure the hunter would’ve popped a vein in his forehead otherwise.

I guess I am different from many people pugging. I would’ve preferred if the first tank had stayed, figured out the fight and really aced it. But the impatience of the other DPS (and the healer, who was at least as rude) didn’t allow him to do that. The hunter shouted his (expletive) relief when the tank dropped group. In terms of time and money invested, maybe I was a bit relieved too. I’d rather complete a fight than spend a half hour wiping to it. That said, I join pugs fully expecting to wipe and to take much longer than I would if I went with guildies. The next time I look at my thirty minute queue time, I know I have people like that hunter to thank. Why would anyone want to subject themselves to that kind of abuse? Why put yourself in a position where your mistakes will be judged so unforgivably? The answer sure isn’t because of the potential for a mount in a fancy satchel of big fat nothing. (I’ve claimed a few satchels myself, but apparently the loot force is not with me).

Granted, the tank wasn’t entirely without fault here. Before queuing for these instances, he could have prepared himself by reading the fights over quickly. When you put yourself at the mercy of a pug, you want to have all the defense you possibly can – which to me, means not having to rely on them for probably inadequate boss explanations. When the hunter’s explanation of a boss fight amounts to “Stay out of fire and get the red cauldron,” you have to be sure you’re missing something. Even so, there’s no call for treating other people like this. If your time is so valuable, then don’t pug, it’s that simple. Spare the rest of us who are actually willing to patiently work through difficult content with a group of strangers. We recognize that coordinating such a group isn’t always easy, but we’re willing to allow for that. Sometimes you have to wonder if folks like this hunter even remember that it’s a game they are playing – that they’re supposed to be having fun.