Recently thanks to the “Sixth” meme Gnomeageddon started, most of us have had occasion to delve into our screenshot folders. Today, Hya from Gkick posted an old and a new screenshot of her character on Twitter. (Her guild, Northrend Travel Agency, is also recruiting! Check ’em out. /plug)

When I saw her images I thought, what a great idea! This is something I find endlessly fascinating in real life, too. My Mom and I bored Voss just a few weeks ago while we pored over old photos for three hours. I wondered, how would an old image of my main character look alongside a new one? 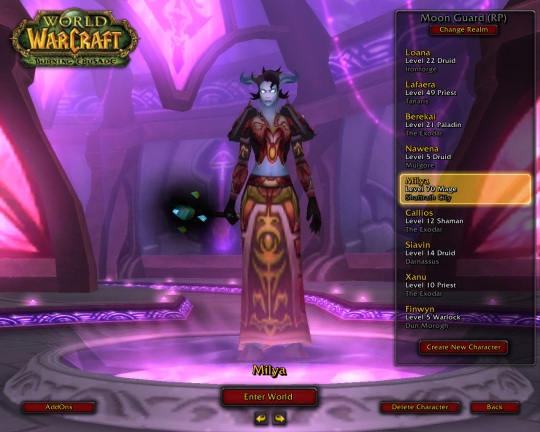 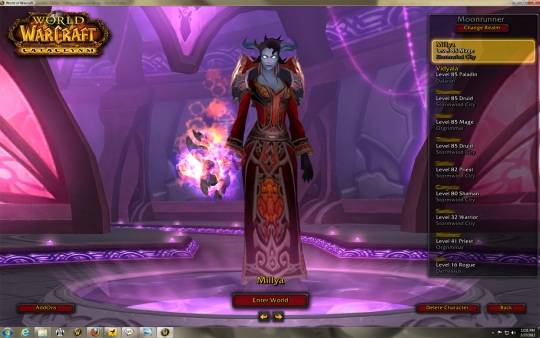 Because this character screen image was the best one I had of Millya from the time, I used the same set-up for my new image, too. What strikes me most is actually the changes in my computer set-up – I started playing on a laptop at something like 6 FPS not knowing how awful it was. My character used to move across the screen in cities as if she were underwater. Now I have a 24″ widescreen monitor and a rig with the graphics turned up to max. I think the difference is pretty evident.

What stayed the same: Millya hasn’t changed in appearance since her creation. I have sometimes sat down at the barber shop and toyed with the idea of giving her new hair, but never went through with it. Same with her horns, which are ginormous. When I made her I said, “If I am going to have horns, by god they are going to be the biggest horns I could possibly have.” I think they are grand. So Millya herself hasn’t changed at all, although is it my imagination, or does she somehow look more confident in the more recent photo? Anyway, in essence she hasn’t changed.

What DID change: Millya used to be Milya with a single “L.” You’ll also notice a different “moon” based server there; she was ‘born’ on Moon Guard but now lives on Moonrunner. Obviously her gear now is different, although I am wearing a robe from the BC era (a recolour of a classic robe, actually). I have many more max-level characters listed in my character list. At the time, Millya was my one and only.

I also dug up some “birthday” shots for comparison! 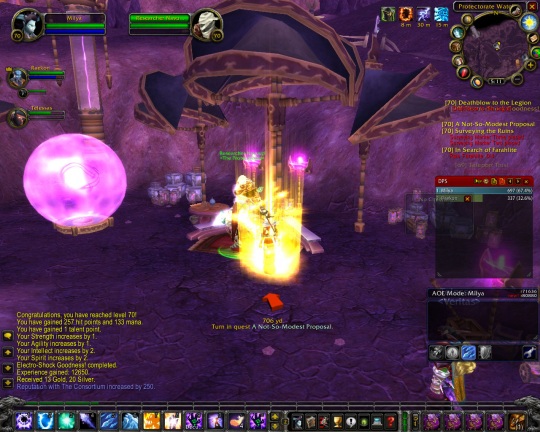 Here I am dinging 70 in Netherstorm. I don’t even know what my action bars were doing, although I do know I used to switch between rows of bars using shift. Were my main nukes on another bar? Was I arcane, was I fire, was I frost? I had blast wave so I must have been fire…where are my fire nukes? I at least HAD a DPS meter by this point so I was aware that DPS existed. At 70 I was: 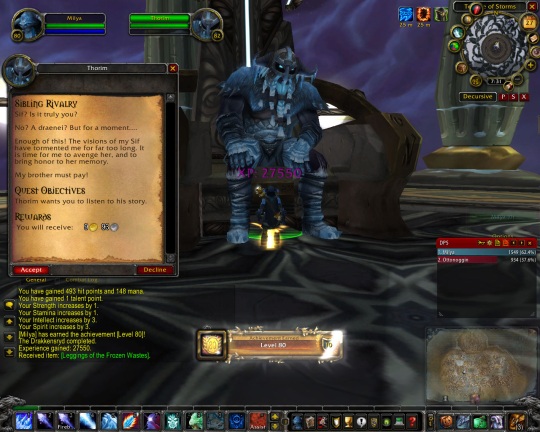 I finished up level 80 in the Storm Peaks, doing the Thorim chain that would eventually unlock the Sons of Hodir. I see that I still wasn’t using a bar addon at that time, although I know I was Frost and at least I have my main Frost nukes on there. I played with Frost a bit towards the end of BC and had decided to level with it when Wrath came out. At 80 I ran with a FFB/elemental build for awhile and then went fire, and later played arcane. At 80 I was: 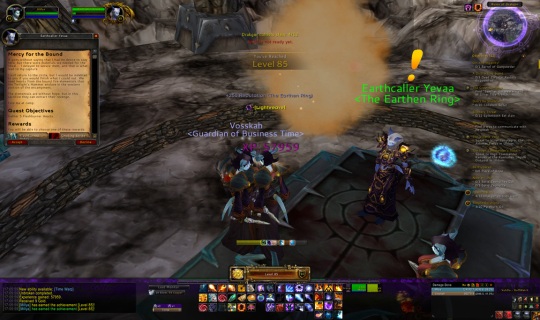 I think my UI changed the most from Wrath to Cataclysm, probably because I started to raid “seriously” then and really worked to try to fine-tune it. I know it looks a bit jumbly in the bar area; the 3×4 rectangle on the right are keys bound to my Razer Naga. Stuff on the bottom two bars are things I don’t use as often, like Frostbolt for snares (in Fire spec) etc. At 85 I was:

It’s interesting to think about what I was wearing in the different “birthday” shots. Within seconds of hitting 70 I’d put on the Spellfire set I’d lovingly crafted in preparation. At level 80 I was wearing level 80 blues and greens; I am pretty sure at 85 I had at least one tailored piece (probably pants) but still had to do a long dungeon/heroic grind to gear up. I think the UI shots probably reveal more about the difference between my character and my playing four years ago and now. I didn’t actually choose the “oldest” image of Millya I had, mostly because they are all shots from behind. (It only later occurred to me to spin her around to have her face in any photos, so I have a screenshot of draenei butt, which is alright but not always excellent photography).

I think part of the reason I like transmogrification so much is because it allows the current-day reality of a character to revisit different times. After all, mostly the only thing that has changed about my character is her gear. I could wear what she is wearing in that shot again, if I wanted to! Although in this case I don’t think I will, I’m afraid I might find it an ill-fitting old dress – better remembered in images than reality! (Even when the reality you’re discussing is virtual…)

Finally, it’s your turn! Post your new and old character screenshots side by side. Try to take them in the same place (if you can), or just pick whichever ones you want. Include your “birthday” images if you’d like! Write about what has changed, and what’s still pretty much the same. Then let me know if you did, and I’ll gather the links together. I am a sucker for walks down memory lane, let me see your old “photos!” If you don’t want to blog about it or don’t have a blog, you can also post screenshots on Twitter and include the hashtag #wowthenandnow just so folks can see ’em. Meantime, don’t laugh at my UI, we all have to start somewhere!

Info About WoW From The Altoholic

Warcraft of the Worlds

So there is a meme going around to go into your screenshot folder, go to the sixth folder and take the sixth image there. I don’t have any screenshot subfolders, so the sixth screenshot in my folders is this one: 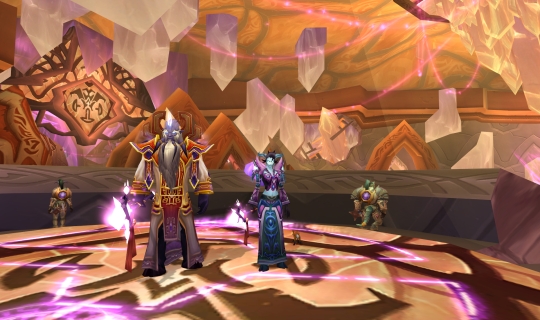 I was tagged to do this by a number of folks, I’m sorry but I slacked off so long that I can’t remember exactly who they all were but Cymre was definitely one (possibly the first). This was the outfit I wore to hang out with Velen while I was doing the Love Is In The Air stuff. I wanted the pink lovebird, so I made a visit to my faction leaders every day, and on this day it happened I had gotten my hands on the Velen staff look-alike from the quest chain in SMV. I was thrilled because I THOUGHT I had done the quest chain already and somehow lost the staff, but it turned out I’d never completed it! This staff is an essential component of any draenei caster’s repertoire.

Speaking of the joys of transmogrification, check out today’s From Draenor With Love for another glimpse into my mad ‘mogging. Bag space is becoming a serious issue.

I think every single person has been tagged to do this screenshot thing already, but if you haven’t, consider yourself tagged! 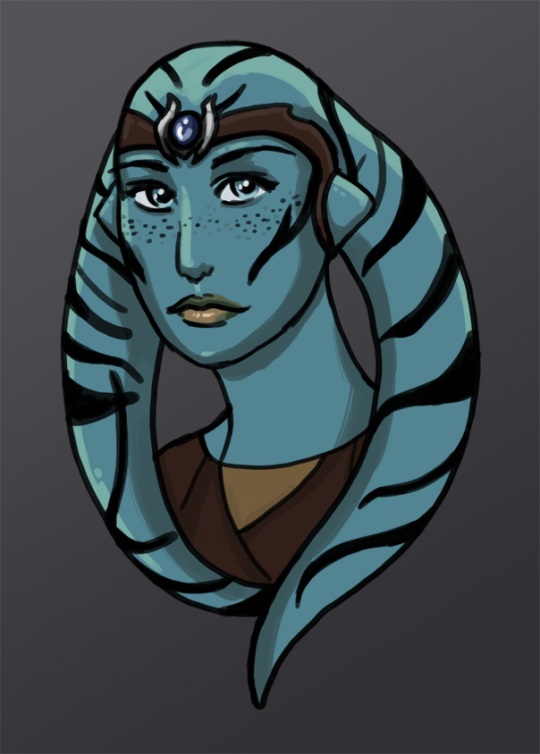 Here’s a Tuesday Art Day that is not necessarily WoW-related, if you’ll forgive me! This is my glacially leveling SWTOR sage, Nima. Like all of my “main” characters, she is blue and has Freckles. Well, she’s sort of a turquoise. But the freckles are essential. The blue thing is the punchline of a recent From Draenor With Love – I like things and people that are blue with a disproportionate love. I don’t know why, but it’s always been true!

I haven’t really been playing SWTOR very much, when I have a hankering to play a game lately I’ve logged into WoW, but I’m sure we’ll pick it up again soon. It’s been an enjoyable game for the two of us leveling together, the story is quite engaging. The few instances we’ve done have been fun. Nima herself is pretty awesome, Voss said she is stuck-up but I don’t see that. In a world where Twi’lek are often exploited (and even slaves) she has to work especially hard at making it pretty clear that there’s no price in the galaxy that is worth her integrity. Also, she will throw a droid in your face. DROID TO THE FACE. So she’s straightforward, no-nonsense and a bit of a hardass. She trusts the Force, and that’s pretty much it.